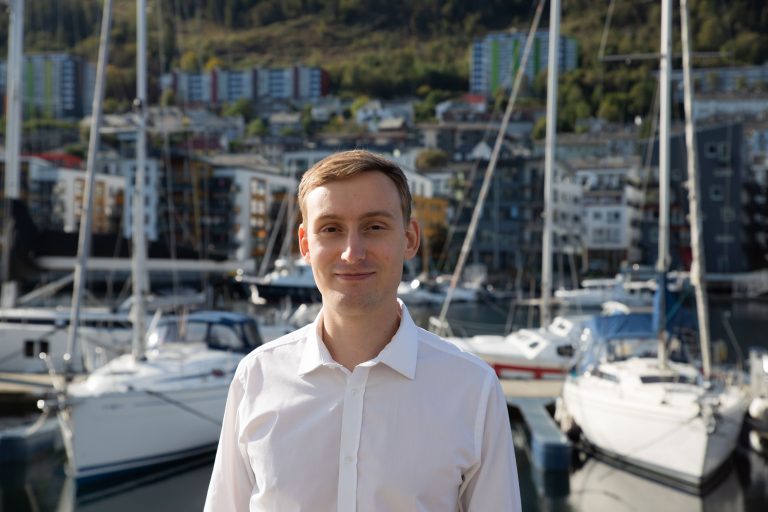 26 year-old, Intern and student at BI Ms in Business majoring in Change Management, from Ytre Enebakk

We welcome Stian, one of our current interns to our company, along with Arild whom you met last week. He will be staying with us for eight weeks as a part of his masters program at BI, where he will be working on various tasks in relation to his studies. Without further ado, let’s get to know him.

What is something business owners have to deal with that you want to fix?

Well, I want to help them with anything that I can help with really, but if I had to choose one issue, I guess it would be how to organize and build culture, particularly for innovation and change, but also employee satisfaction.

What do you do at VINCO?

As Interns at VINCO we do a variety of tasks. In a small consultancy like VINCO there are plenty of opportunities to apply the knowledge I acquired at BI. I’ve been dipping my toes into everything from sales preparations and marketing communications to making internal policies. And I drink a lot of coffee, like I mean a lot.

I think the main thing is the fact that our supervisor, the CEO is so available and the fact that the workdays are loose, as long as we get our tasks done. I also like that we learn how a small business is run, and get to do such a variety of things.

I am currently doing a Masters in Science of Business with a major in Leadership and Change at BI, where I also did my bachelor, as I do the five year integrated program, siviløkonom. I have also dabbled in various other programs, like when I did a semester in computer science at NTNU and did Anatomy and Physiology at Atlantis Medical College and wanted to become a doctor, ultimately I chose BI. In between there I had my conscription time in the coastguard, sailing around Svalbard, which was very nice.

What are the values that drive you?

I don’t have a particular mantra, or dogma, that drives me, but I guess I try to be a decent human being, being respectful of other people, doing to others what you want them to do to you, Golden Rule, that kind of stuff. Also trying to have empathy and understanding people’s unique perspective, although I must admit, I sometimes don’t. Other than that I like to try my best in most things, and I try to slow down and enjoy life, and live consciously.

What do you enjoy doing when you are not working?

Well, nowadays you will probably find me running around, preferably at forest trails and other paths, a couple of times a week. Beyond that I enjoy Netflix, like most other people, the occasional get-together at a friends house or a night out (remember those?) and I play the guitar sometimes. Otherwise, I dabble in gaming, hunting and the occasional fishing trip or hike. And I like traveling of course. I also enjoy cross-country skiing, from time to time.

What are you most curious about?

If you could live anywhere, where would it be?

Right now I would probably say Hawaii, just because I’ve been watching a alot of Hawaii-five-o, hehe.

What motivates you to work hard?

Well, mostly interest in the work I guess, and maybe ownership of the task, and the motivation to do well.

What are your favorite books, movies or series?

Hmm, I don’t do much reading beyond the curriculum these days, but if I had to pick a book I found particularly useful I would say How to Win Friends & Influence People (by Dale Carneige), and of course I loved Lord of The Rings (by J.R.R Tolkien) when I was younger. And I really loved Narcos (Netflix) Rome (HBO) and Band of Brothers (HBO).

Who is your hero?

Well, I guess if I have a hero it is my grandpa, and both my brothers really. They are all hard working, and decent, fun people who seem to achieve anything they set their mind to, with endless energy and drive.

On a similar note, who would you want to be stranded with on a deserted island?

Oh, hmm, I guess it would not be too bad to go with one of my brothers, actually. One is a doctor and the other one a carpenter. Tough call, but probably the carpenter. On second thought, forget them. Margot Robbie, of course, would be my answer.

And what would you bring?

A dog. Or maybe some good rope or a chainsaw.

Seems like I adjust surprisingly well to getting up early, but I tend to sleep in if i can, so I’m a late sleeper, more so than an early bird, at least.

Favorite subject from your studies?

I would say microeconomics from my masters actually, it was just very rewarding for me when I truly understood the material.

‘It is health that is real wealth’ I think Gandhi said that.

Khruangbin, I guess is a band I have been listening to lately, very funky, and I know, a very weird name. And alexrainbirdmusic,

which makes awesome playlists on spotify.

Who knows you the best?

The closeness to nature, like you have the mountains on either side, and the ocean as well.

The rain, although it hasn’t rained as long as I’ve been here (three weeks), and the Bergen dialect, sorry, but it is not the most beautiful.

Ever broken the law?

With that we thank Stian for the interview and wish him the best for the remainder of his internship here at VINCO. Sep 1, 2021

Any cookies that may not be particularly necessary for the website to function and is used specifically to collect user personal data via analytics, ads, other embedded contents are termed as non-necessary cookies. It is mandatory to procure user consent prior to running these cookies on your website.