Music Tech Fest – an event full of inspiration and innovation 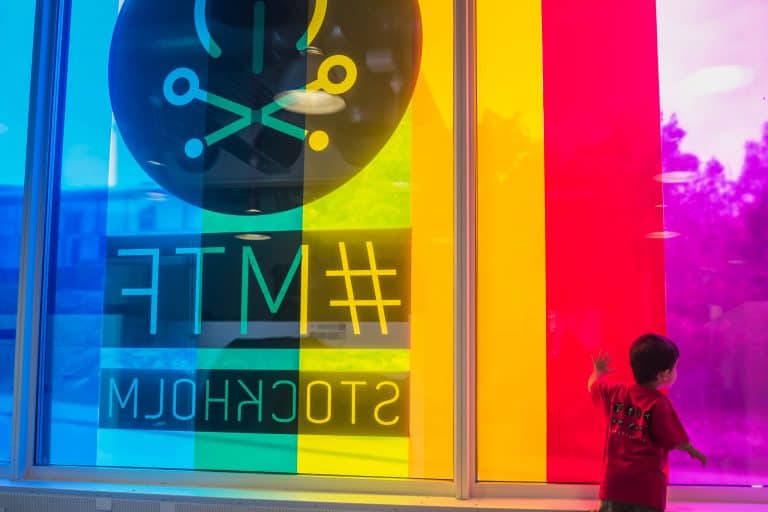 The city of Bergen invited Michela Magas for visit in May as a part of the Festspillene[i] and launching of the Bergen Nå(Now) project.  I have read about Michela and her work before, and I had the honor to meet her at an innovation conference in Zagreb where I was also giving a speech.  However, when she came to Bergen and when I saw her presentations live I was even more blown away by what she is doing. I decided then: I must see that live. So, I went to Stockholm in September to experience Music Tech Fest.

Michela Magas is the founder of the Stromatolite and The Music Tech Fest and is graduate from the Royal College of Art. She is an innovation catalyst who bridges the worlds of science and art, design and technology, and academic research and industry. She has won the prize the female innovator of the year 2017 at European Commission for her work through Music Tech Fest.

Music tech fest is a kind of a festival, but it is not a music festival you have used to attending.  It is more a festival of innovation experimentation where music, technology, academia, and private sector meet. Music Tech Fest is a platform, an innovation ecosystem with a community of over 7000 innovators from all backgrounds and areas of expertise. What is more interesting is that this ecosystem has a limited time of idea incubation, only during the Festival week when creative minds gather to make something new.

This year it was the first time The Music Tech Fest was organized in Stockholm, at KTH. Michela moved from London to Sweden and so she brought the Festival there as well. From my previous visit, I remember Stockholm as a beautiful history-rich city. This time I even got upgraded, getting Norwegian summer served for the whole stay as well; temperatures over 20 degrees and wonderful sunny days…

While the official time of the festival is Friday to Sunday evening, however, many activities happen prior to and parallel to the Festival. MTF Labs start on Monday before the MTF. MTF Labs are labs, literally, where creative minds meet to reinvent the way we interact, collaborate, create and communicate. The venue of the MTF labs was very special, it was situated in the old nuclear reactor that is 30m under the ground. By entering the elevator, you are teleported to the end of the 1960s, the time of the cold war fear.

One, among many interesting things, that was prepared at the #MTFlab was the project MUSIC OF THE SPHERES / SISTER MOON led by Martine-Nicole Rojina. MPATHY STUDIO is a collaboration with the Dwingeloo Radio Telescope, HAM Radio Astronomers Jan van Muijlwijk, Harry Keizer and the artistic residency program of CAMRAS initiated by Daniela de Paulis. The idea behind this project is that the waves which travel through space, together with the surface structure of the moon, “colour” the transmitted signals in a very characteristic way revealing the lunar voice. The radio waves that were sent are now traveling to the universe at the speed of light for a very long time and actually further than any Human has been physically. At MTF Stockholm a unique artistic moonbounce improvisation is created, where samples of bassoonist Marcello Giannandrea and cellist Federico Bragetti will blend with globally collected sentences, participations of MTF lab collaborators, percussion of transdisciplinary musician Francesco Cigana and the Gravity Synth played by Leon Trimble in collaboration with the LIGO researchers at the University of Birmingham[ii].

Two days prior the festival were reserved for the MTF Research Symposium. This is an arena for researchers working at the intersection of music and technology to discuss contemporary challenges and trends. For example, Nenad Bach from New York is interested in research on how ping-pong helps patients with Parkinson’s disease. Sonja Durajlija Zinic is interested to find out if pattern repetitions in a genome have similarity with pattern repetitions in music. We have discussed ideas such as explaining smell with music. How to increase inclusion in the art of music, how do you make an instrument for a one-handed person, etc… It was really inspiring to hear many interesting ideas about which I have not been giving many thoughts before… I am still thinking about the question: how would you play the smell of the leather jacket?

The festival itself is a separate story with many interesting exhibitions, small performances, interesting talks, etc…  Some of the things I would like to mention is the talk of prof. Danica Kragic introducing us to her interesting world of robotics and AI; dear Nenad Bach,  Jan Bang with their talks, interview with Roope Pajasmaa, the director of Teosto;  Anne Dvinge presenting her innovative idea of House/Livingroom concerts ;  Arghavan Agida with her project of connecting art, war and support; Theodora Nordqvist,  the director of Swedish Made Management sharing her thoughts on the industry etc…

Among other famous names, there was also Imogen Heap. Imogen Heap is an English singer, songwriter, record producer, and audio engineer. She is also known for trying to introduce blockchain technology to music in order to solve the author’s rights problem. She has even written an article for the Harvard Business Review.  As Imogen Heap is pointing out, a major pain for creatives in the music industry- such as songwriters, producers, and musicians- is that they are the first to put in any work and the last to ever see any profit. The rise of blockchain technology might solve this challenges in the future. Her proposed solution is myCelia project.   The Creative Passport is a digital container for verified profile information, IDs, recognition, works, business partners. At the festival, she had several workshops and one of it was a hackathon for the creative passport. At her speech, we had witnessed a great solution the winning team has made. Not only the solution was a database based on blockchain technology but was also directly connected to other platforms like Amuse music distribution platform and we had a chance to see how it works live. Imogen also had a beautiful concert where she handed out QR codes to the audience which will enable the audience to get a share of her royalty rights for one song chosen from the evening performance. The goal of that experiment is that the audience truly understands what goes on in the entertainment industry especially as it concerns the artists.

MTF week was full of amazing things. I wish I could mention all of them but then this post would be much, much longer. One thing that has to be mentioned is this year’s headline of the festival: “women in the lead”. I am so glad that the organizers of the MTF are moving boundaries in every direction.

On the web pages of the MTF, you can explore more of what was happening there, but the best is to simply to be there next year. ? Hope to see you there.

This website uses cookies to improve your experience while you navigate through the website. Out of these cookies, the cookies that are categorized as necessary are stored on your browser as they are essential for the working of basic functionalities of the website. We also use third-party cookies that help us analyze and understand how you use this website. These cookies will be stored in your browser only with your consent. You also have the option to opt-out of these cookies. But opting out of some of these cookies may have an effect on your browsing experience.
Necessary Always Enabled
Necessary cookies are absolutely essential for the website to function properly. This category only includes cookies that ensures basic functionalities and security features of the website. These cookies do not store any personal information.
Non-necessary
Any cookies that may not be particularly necessary for the website to function and is used specifically to collect user personal data via analytics, ads, other embedded contents are termed as non-necessary cookies. It is mandatory to procure user consent prior to running these cookies on your website.
SAVE & ACCEPT